All photos are courtesy of The Herald Sun Online and The Age Online. 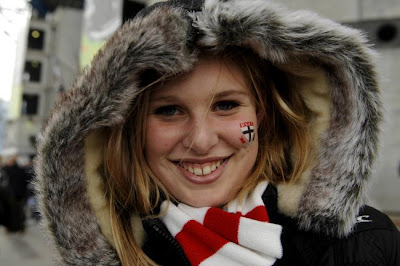 Luke Ball neatly summarised the grief that washed over the St Kilda rooms after their loss of a desperately close 2009 AFL grand final to Geelong on Saturday. 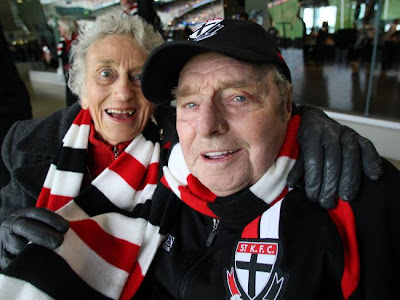 Tears were plentiful – not least from inconsolable captain Nick Riewoldt – as the Saints came to terms with the fact that this was a year in which they carried all before them except the premiership cup. 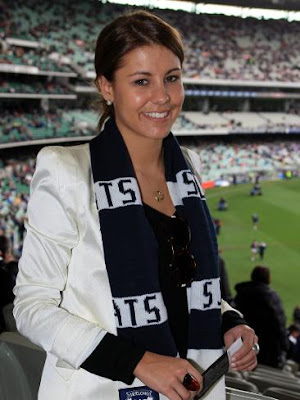 “Half an hour ago was the worst feeling I’ve had in my life, to be honest. It was shocking,” Ball said. “Just looking around at a few of the older guys as well, it was as bad as I’ve felt. 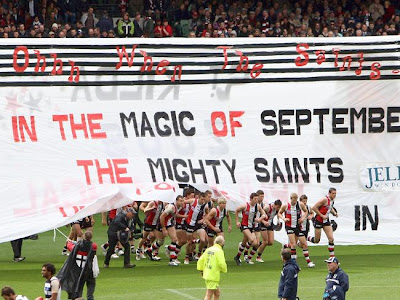 St Kilda’s efforts in 2009 were inspired by how the Cats had raised the standard of the game over the previous two seasons, and Ball said the league owed much to the Geelong club for their combination of class and unstinting application. 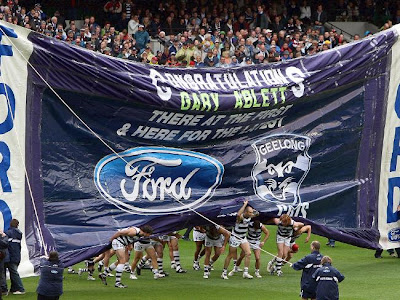 “Full credit to them, they’re a fantastic team,” he said. “The competition as a whole has a lot to thank Geelong for over the past three years, the way they’ve gone about it. We certainly chased them pretty hard and tried to model ourselves on them a bit, but they were just a bit too good when it mattered.” 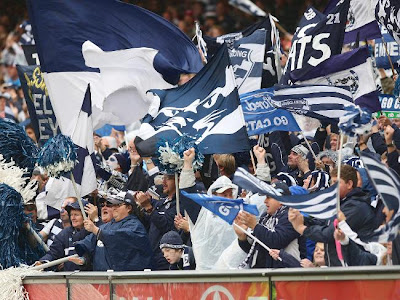 A word of explanation about this. The AFL instituted, in the early 90s, a new policy which evened up the competition. Until then, the moneyed clubs [the Man Us of the world] usually won or were thereabouts and consequently had the largest number of fans. The also-rans, like St Kilda, were the perpetual whipping boys and some of these clubs broke up in the reorganization. 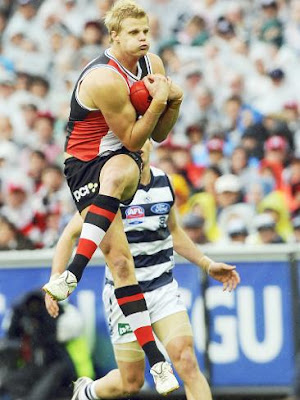 St Kilda, one of the original teams, did not break up and slowly, over 5-7 years, built itself up until this season, when they swept all before them, including Geelong. In Australia, there is great affection for St Kilda and many rate them as their “second club”, along with the old Fitzroy. No one dilikes them. 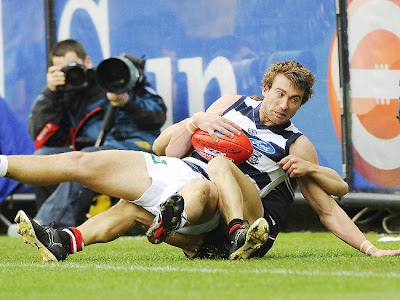 So, in 2009 unfortunately, Geelong were cast as the party-poopers and yet theirs too, many forget, was a rags-to-riches story, some years earlier. 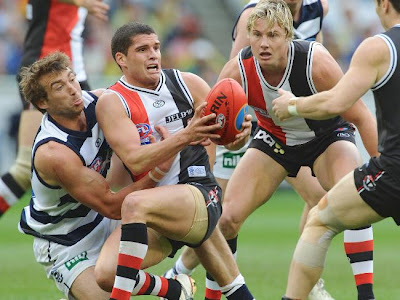 Geelong was one of the two original teams, with Melbourne, in 1859 and is from a coastal town [now a city], often referred to as “sleepy hollow”. Let’s face it, they can be a bit provincial down that way and the city slickers make a lot of fun of the town’s reputation as “hicksville” though this was far from the truth. 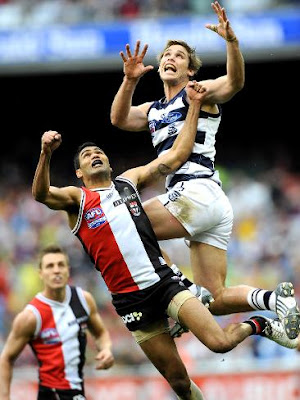 For all that, over the decades, they’ve produced some stunning teams, country boys, farmers’ sons and while discipline was never their catchcry, exciting, free-flowing football was their motif, not unlike the southern hemisphere clubs and the Barbarians in rugby. 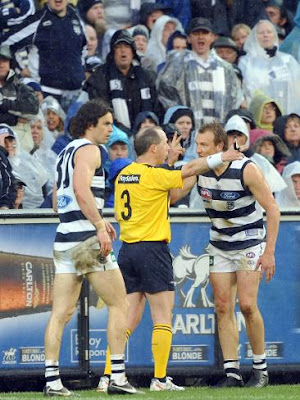 As the outsiders in the competition but never one of “the city clubs”, not unlike me in the Britblogosphere, they rebuilt and had some hearbreaking losses in the past five years, despite co-opting a coach [manager] from one of the city teams, a proven champion and a hard taskmaster. 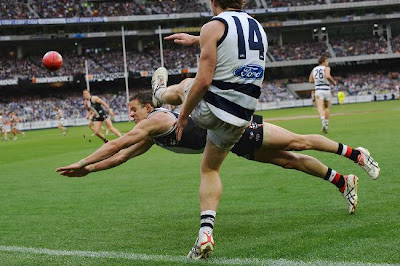 He taught them self-discipline and dedication and two years ago, the result came – they took the flag after a 44 year layoff, that previous flag itself after an 11 year layoff. You get the idea – always up there but never getting the cream. 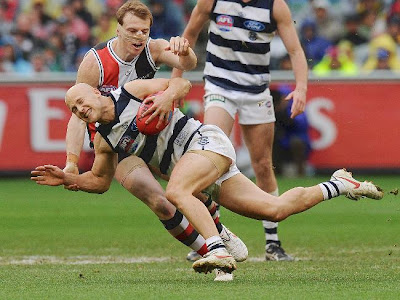 In the modern system, teams tend to be up for three, maybe four years and any flags have to be won during that time, before players age too much and the machine shows signs of cracking. That’s why, last year, having won almost everything during the 2008 season, often grinding other sides into the dirt, they were pipped on the one day which counted – the last day in September. 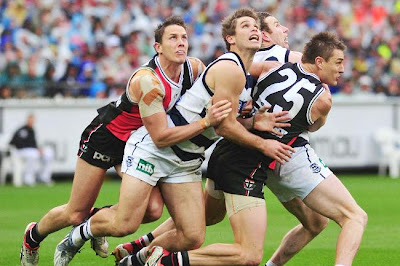 As you can gather from the opening remarks in this post, that hurt. That really kicked them in the guts. Would they recover in 2009? 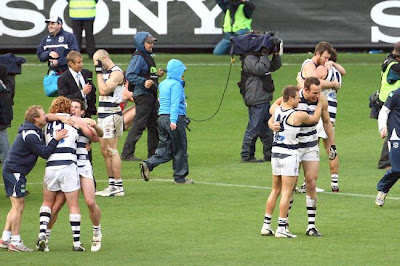 Well, they did and they didn’t. The new golden boys, St Kilda, all praise to their coach and to them, were now sweeping all before them. After Geelong lost to them mid-season, they fell apart a bit and it was touch and go if they’d even see the grand final. 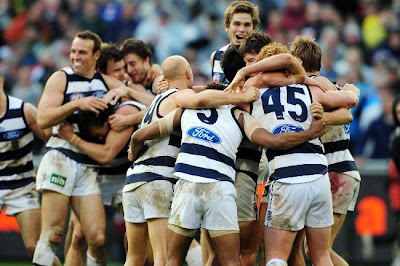 As you know by now, they did manage to get there but as the underdogs to St Kilda and throughout the game, that’s how it was panning out – St Kilda having far more scoring shots but Geelong pressure and their nerves not helping them in their cause. 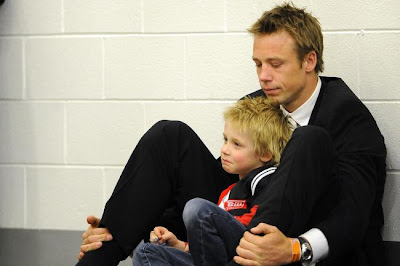 Geelong, now an ageing team, would surely succumb to the fresh youngbloods but in the end, it was sheer grit and experience which saw them over the line in a very close battle all day. 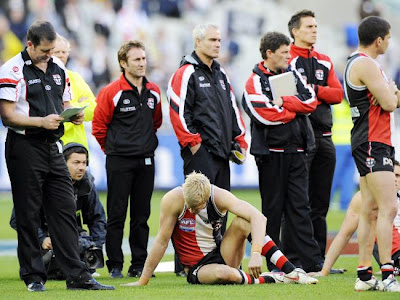 Relief, more than elation was the prevailing emotion, some sort of redemption after 2008 and the coach, Bomber Thomson, made that point in the after-match press conference. The other coach, Ross Lyon, stoical, put it down to those small percentage things on the day. 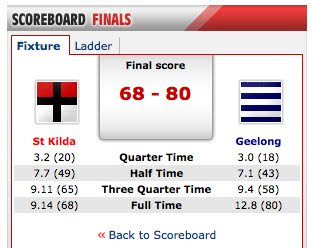 Can St Kilda show real character and bounce back next year to “avenge” their loss?

Can Geelong do it one more time, after their sell-by date? Will they still have the hunger?

There are 14 other teams who’ll have a say in that matter as well.

← The Illusion of Beauty
Britblog Roundup N241 – Best of Britain →