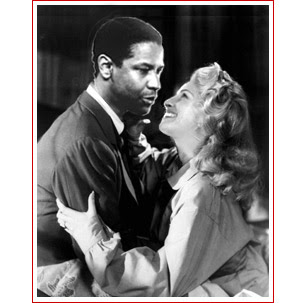 The issue of race is consuming the U.S., if the media’s to be believed, which I don’t.

It seems to me that Washington Rebel, through Irish Cicero, at Theo Spark’s [sounds like a racehorse pedigree], has it right when he quotes Booker T. Washington [how derivative we bloggers are]:

“There is a class of colored people who make a business of keeping the troubles, the wrongs, and the hardships of the Negro race before the public.

Some of these people do not want the Negro to lose his grievances, because they do not want to lose their jobs. There is a certain class of race-problem solvers who don’t want the patient to get well.”

The picture [above left] was carried at the top of an article on race issues in Hollywood and now it’s the blacks who see this relationship in the picture as taboo. They have this “pride” thing going, you see, where whitey is considered to be of inferior stock.

My attitude to blacks can be gleaned from last evening’s listening or from this evening’s.

There’s a distinct difference in culture and style between races … and in some things, such as soul, rhythm and winning sporting events, I don’t think the black can be beaten. Women have told me they’re not bad as lovers either. In other things, they’re often too laid back to be of much use.

If you look at the Crystals this evening, the question is what’s black and what’s white? What’s a negro and caucasian’s offspring to be called? What about a native American [Red Indian] with a grandchild of an African negro? Who cares? One can still have unworthy thoughts about La La Brooks. I’d have been burnt by the KKK as a nigger lover long ago although I’m sorry to disappoint that I’m not a long-haired hippy.

As Shakespeare observed – what’s in a name and what’s in a label? The attitude the person displays is the issue, not the names he uses. The way he uses the name is relevant, not the actual name he uses.

Now I deliberately use the name “black” as a direct consequence of the following, in the Irish Times, of April 25th, 1998, when Whoopi Goldberg was quoted as saying:

I dislike this idea that if you’re a black person in America, then you must be called an African-American. I’m not an African. I’m an American. Just call me black if you want to call me anything.

Couldn’t agree more. And I’d go further and reiterate that there are differences, just as there are between men and women, adults and children, those differences should be celebrated and they add to the rich colour of life [pun half-intended]. For goodness sake, a dark-skinned Italian is different to a freckly, white-skinned Anglo-Saxon. Does that stop anyone making love?

It’s an act of PC insanity to pretend differences don’t exist but it’s a trickier question whether those differences make … er … a difference in your attitude.

Fourteen years ago, a black youth demanded of me:

“You asked me a question and I’m answering it. Yep, I’m cussin’ you, as you put it.”

“You admit you’re a racist?”

“No, I’m not racist in the least. Why would I keep the company of people like you if I was racist? But I am cussin’ you because you just said a very pratty thing – totally moronic, in fact. Anyone can do that and you just did.”

I imagine he went off and reported me to someone for racism. The colour of his skin was of no consequence – he was actually a good looking person. But his sense of victimhood was a pain in the butt and it was a very black thing to throw at whitey. And I’ve known plenty of lazy blacks and plenty of lazy whites too.

I think we need to get real on this issue, instead of using it as a big stick to bash someone with and to gain ourselves advantage in society.