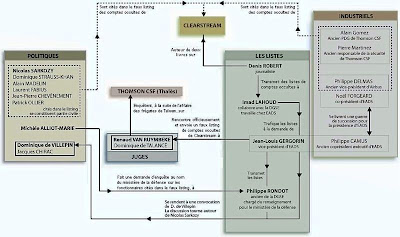 It’s flowing strongly, the Clearstream biz, churning up mud along the way:

To put the issue in perspective, the Grauniard called it:

A case of paranoia, slander and vengeance involving:

a) Dominique de Villepin, an ex-prime minister who dazzled the world on 14 February 2003 with a historic speech at the UN against the war in Iraq, a Gaullist with a taste for history and poetry and a penchant for Bonaparte;

b) Nicolas Sarkozy, former Chirac minister, today president of France, whose permanent agitation has transfixed his compatriots, and amused, irritated and awed the world in equal measure since his election on 5 May 2007;

Naturally, the socialists are lapping it up, hardly abel to believe their good fortune, after their own infighting:

Le Monde concludes: “The involvement of the head of state unmistakably emerges from the testimony. Contrary to official statements it is very probable that Jacques Chirac issued ‘instructions’ in this affair… Irrespective of what the prime minister has said so far, the almost obsessive search for elements which could compromise the UMP president is unmistakably clear.”

The French love a good scandal but not of this sort, at this time and indications are that most French, for either reasons of boredom or reasons of fear for what it might do to UMP, vis-a-vis the next election, ushering in the truly loopy and perpetually infighting French Left, do not think it should have gone this far.

If UMP have plans to remain in power, they’d best get Sarkozy to close this thing off out of court. But that’s not in the nature of Them, is it?

Let me wax religious for one moment. What the Clearstream affair revolves around is someone’s knowledge that something was false and his willingness [however true or not is it of Villepin in this case] to remain silent on it and to allow things to come out which would damage the other.

That is no different to the exhortation, in Christianity that “blasphemy against the spirit can’t be forgiven”. Translated into Secular, it means exactly as stated – knowing something to be based on a false premise, namely the way the Pharisees and Saducees were going about things, they chose instead to bring down the accuser and rival with false testimony.