This is the post I’ve been waiting for, from Mark Wadsworth and might I suggest you read it in conjunction with his other pieces on LVT, as well as the comments on his own site.  Thanks for that, Mark:

Today, let’s look at the relationship between house prices and earnings in the various regions of England & Wales. A simple scatter graph with an auto trend line shows a relationship, which might be skewed by the one in the top right hand corner (London), so let’s try that again without London (click to enlarge). 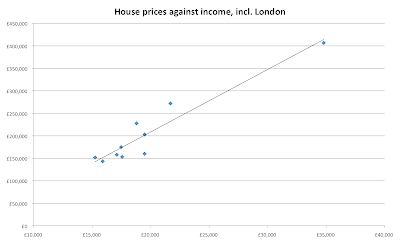 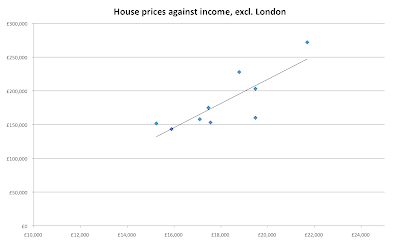 So let’s plot the house price-to-income ratio for the ten regions of E&W, in order of increasing incomes (the lower series, double line). As you can see, the trend line for that series slopes upwards slightly (so in areas with higher incomes, house prices are disproportionately higher).

You can flatten off the trend line by deducting an amount to represent bare minimum living costs excl. housing costs of £5,500 per capita (this figure arrived at by trial and error, but seems reasonable enough). The result is the upper series (bold black line). I can suggest a couple of reasons why the South West ratio is so high*, but I’m not immediately aware of any reason for the East Midland ratio being so low. Click to enlarge. 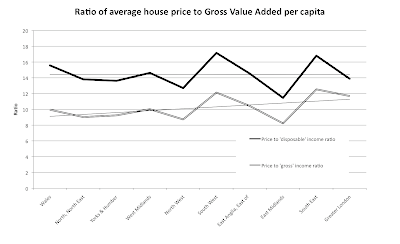 What conclusions do we draw from this, if any?

i. There are no massive regional differences in the standard or quality of housing, so it must be fair to say that the main driver of the price differences is the extent to which regional incomes exceed a basic level of spending on other necessities (i.e. £5,500 per capita in this case).

ii. The rent or mortgage payments for an ‘average’ household in any area will be x% of the value of the house or flat, or y% of that household’s gross income minus £5,500 per person.

iii. We also know that income tax/National Insurance are calculated as 43.8% percentage of your gross income above an arbitrary amount of £6,064 per annum.

iv. Your rent or mortgage is just a payment to live in that home in that area, of course, but if you live in a higher income region, a large part of what you are paying for is the fact that it is easier to find a high paying job in that area. Similarly, income tax/NIC increases the more you earn; it is the ‘rent’ that you have to pay for the right to go about your trade or profession.

v. We all know that income tax/NIC are ‘publicly collected taxes’ (boo! hiss!), but if rents and mortgages are calculated on more or less exactly the same basis, are they not just ‘privately collected taxes’? It’s fair enough for a landlord to charge you for what he provides (a roof over your head, repairs etc.) but isn’t he also charging you for ‘stuff that havs nothing to do with him’ or even worse ‘the right to work’?

vi. In other words, while it is conceptually easy to scrap ‘publicly collected taxes’ you can never get rid of such ‘privately collected taxes’. We already have Land Value Tax, it is just that it is collected privately (in non-cash form in the case of owner-occupiers).

vii. There will never be such a thing as a ‘tax free’ society – the only question is whether LVT should be publicly collected** and spent on things that benefit us all (like scrapping income tax, NIC, VAT and so on, let’d get rid of the taxes that we can do something about), or whether we ought to allow it to be privately collected.

* A high proportion of second home owners; a slightly higher proportion of pensioners that rest of UK (so GVA per non-pensioner is higher), rabid NIMBYism and the fact that it’s just a nice place to live, with the beaches and everything.

** Yes of course there’d be exemptions or discounts or a deferment option for pensioners.

← All aboard for more enviro-lunacy
digital art →

18 comments for “Houses Of The Holy”