Mark Wadworth‘s next instalment on the LVT goes to Kashmir:

A common response to the proposal to scrap taxes on incomes or production and to tax land values instead are the cries of “It’s my land! An Englishman’s home is his castle! What right does The State have to come along and make me pay tax or rent on my own land?”

I would like to counter this well rehearsed bit of propaganda with the following example/analogy:

1. When India was originally partitioned, areas of land had to be allocated to one country or the other, and there was mass migration of Muslims to areas allocated to Pakistan (incl. what is now Bangladesh) and of Hindus to India (and lots of random killing along the way).

So the proxy war that has been fought ever since over control of Kashmir illustrates the general principle that wars are fought over land rather than over anything else – I have no reason to assume that either side has the intention of enslaving the population of any territory it might gain.

Both countries seem to grudgingly accept that the Line Of Control is more or less permanent, but there’s always a nagging doubt that the Line of Control might be moved by force. 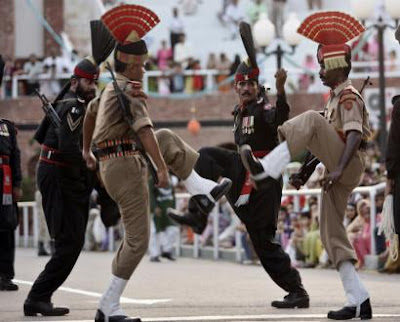 2. That just about exhausts my general knowledge of the situation, as highlighted by the fact that I used a picture of the Wagah Crossing, which is a hundred miles south of Kashmir.

3. But it does illustrate the general principle that control of land is the most basic function of government and comes before all else; wars are primarily fought over controls of land or territory; a government wants to control all the land within its border (see also Pakistan/North Western Frontier); and if a government of a country controls land, then that land is part of ‘the country (see e.g. British Overseas Dominions, all those little islands that geographically or culturally have little to do with the United Kingdom).

4. It is fairly irrelevant where individual Muslims or Hindus in Kashmir would like the Line of Control to be; where it ends up is decided by the two governments, acting, we would hope, in the interests of their whole populations, including those parts of the population who are not currently affected by the dispute, but who do not want to see their sons sent off to kill or be killed.

Defending your border, or starting an offensive war has costs of course, but does this not give us a clue as to how the money ought to be raised? Oughtn’t these costs be borne by those who have most to lose or to gain, i.e. land ‘owners’ in your half of Kashmir, or those people to whom land is allocated in any part of Kashmir that is taken from the other country by force?

5. What relevance does this have to land ownership in the UK, or any other country which is safe against invasion by other countries (let’s gloss over mass immigration for these purposes), you might ask?

6. The relevance is that even in country which has put all these territorial or tribal battles behind it (such as the UK), land ‘ownership’ can only happen under the protective umbrella of The State. It is not the case that land ‘ownership’ is something entirely independent of the existence of The State; which preceded the existence of The State; and on which The State tries to impose itself. The relationship – whether on a historical, political or economic level – is completely the other way round, as I will try to explain.

7. Please note that for these purposes, ‘The State’ is All Of Us. Arms of the government such as the police, the courts, planning departments deal with exceptions rather than the rule, which is that land ‘ownership’ can only work if all or nearly all of us respect others’ rights.

8. I think we can agree that without the state-protected right to exclusive possession of land, our society and economy would collapse (even in Socialist economies where nominally everything belongs to The State, most people or businesses have exclusive possession of their home or their premises), so there are huge benefits to this, which accrue to tenants as well as owner-occupiers, but land ‘ownership’ itself only rides on the back of this; and the economic benefits of land ‘ownership’ are merely derived from and are secondary to the idea of ‘exclusive possession’.

9. The benefits of land ‘ownership’ only accrue to owner-occupiers or landlords, as tenants have to hand over the value of the benefits they derive from the right to state-protected exclusive possession in cold, hard cash every month. What makes it worse for the tenants is a large part of what they are paying for is things which they have already paid for through their income tax (house prices are much higher if in the catchment area of a ‘good’ State school).

10. And while the economy and free markets in general (and the right to exclusive possession of land) are a positive-sum game, the total amount of land is physically limited so at best, it is a zero-sum game in practical terms. Any change in the selling prices of land does not add to or detract from overall wealth.

11. If you look more closely, you’ll know that land ‘ownership’ is a negative sum game from the point of view of the productive economy (the source of all wealth, along with natural resources). As the productive economy grows, an ever larger share accrues to the rental value of land (which is usually capitalised into the selling price), as illustrated by my earlier post.

12. Home-Owner-Ists may dispute that there is a steady transfer of wealth from the productive economy to land ‘owners’, but is it not widely accepted that Consumer Price Inflation (which is based on the value of freely traded goods and services) rises more slowly than Retail Price Inflation (which includes rent and mortgage payments)? Is that not evidence enough?

Just sayin’, is all.

All Mark‘s posts here can be found in the left sidebar.