Second of the TenYears gone series by Mark Wadsworth, cross-posted at his site:

I have often described the last decade as the pinnacle of Home-Owner-Ism – an economic philosophy which, in true 1984 fashion, represents the mutually exclusive beliefs that “Rising house prices are a good thing” and “It is important to encourage a wider spread of home ownership”.

“Home-Owner-Ism” (with hyphens and capitals) just happened to be a phrase I coined on one particular day, which has led to some people thinking that I am somehow against owner-occupiers or the idea of owner-occupation. Far from it! I was one in the past and fully intend to be one again in future (and Her Indoors is definitely in favour), it’s deeply engrained in our national psyche and I wouldn’t deny others that which I’d like for myself.

What I believe in is the second half of the Home-Owner-Ist mantra: I’d like to see a wider spread of home ownership, which entails lower prices and/or more new construction and/or lower taxation of incomes etc. Remember that during the Home-Owner-Ist decade, the proportion of household who are owner-occupier actually fell quite markedly (see page 9 of this).

So, without further ado, I’ve drawn up a Venn Diagram, with ‘homeowners’ (in the narrower sense) in the left hand set and “Home-Owner-Ists” in the right hand set. Of course there is a large overlap in the middle, and none of these categories are clear cut, but hopefully this will give you an idea of who is driving “Home-Owner-Ism” and who really benefits from it. 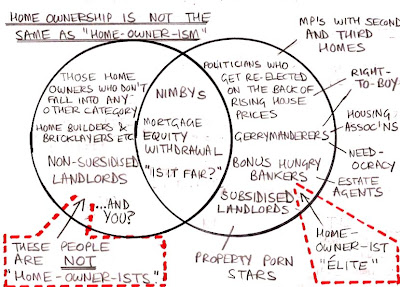 All Mark’s posts at this site can be found here.

← Les merveilles ne cessent jamais
Pull the other one →